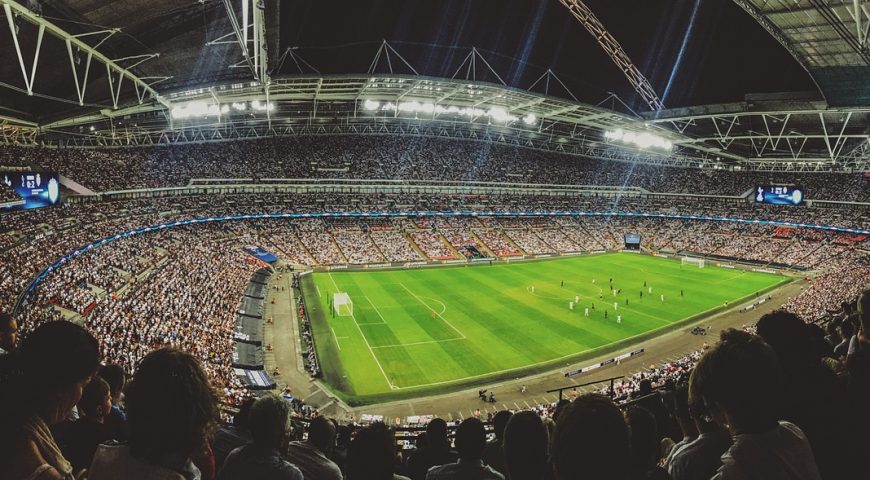 Like most of us Brits, world cup fever has taken over here at adeo. The UK may not have played host to the world’s biggest sporting event for 50+ years, but the country is a proud sporting nation and football is arguably the national sport in England! World cup fever has swept the nation, but with Scotland and Wales failing to qualify, Britain’s hopes rest on the shoulders of England’s national team. For now, we can only dream of football coming home and the UK hosting a World Cup event but to satisfy my growing desire to witness one, below is a list of some of, Britain’s most famed footballing stadiums which are famous the world over and which would make Britain as good a host nation as any!

The home of English football, of course, lies in London. Boasting a maximum capacity of 90 000+, the new Wembley stadium is England’s footballing mecca, although the mammoth venue is not limited to the beautiful game. The stadium is a smash hit for some of the world’s biggest musical talents from around the globe and is now host of an annual NFL season match.

Home of the Red Devils themselves, few cities in the world are blessed with such an historic venue, even fewer would be worthy to host such an iconic sporting team. Old Trafford and Manchester Utd is a match made in heaven – or more accurately – Manchester in the North of England. Dating back to 1910, Old Trafford’s rich history continues to draw fans from all around the world, reaching its maximum capacity of 74,994 almost every premier league game.

Few sporting rivalries are as fiercely contested as Manchester Utd vs Liverpool. The North West Derby trumps any soccer match in England and ranks as one of the highest profile matches in European football and there could not be a more fitting host. Anfield stadium is as iconic as it is loud. The stadium prides itself on its atmosphere and the deafening cheers of a people so engrossed by football smack Anfield on the map as one of the footballing world’s best stadiums.

A great host of a great club. Celtic Park’s renown is testament to the club’s enthralling history and what it stands for. With a capacity of just over 60,000, Celtic park is the largest football stadium in Scotland and one of two teams in Scotland’s largest city, Glasgow and as such is is an annual host of the ferocious ‘old firm’ derby day between Celtic and Rangers. Nicknamed ‘Paradise’ Celtic Park’s aura and cultural significance is rivalled by none.

The youngest on the list, the Emirates in London is yet to capture the hearts of its Arsenal faithful, but its immaculate, luxurious appearance oozes class – something Arsenal football club has long been associated with. With a capacity of 60,000 the Emirates is a marvel of sporting venues and its potential to excel as one of Europe’s best stadiums is in its early stages.

It may not be a dedicated footballing stadium, but the Principality is the pride and joy of the Welsh people nonetheless. Opening at the turn of the millennium, this 75,000-seater cauldron was originally recognised as the Millennium Stadium but is now formally known as the Principality. Home of the Wales national rugby team, situated in the heart of the Welsh capital, Cardiff, the iconic stadium is a symbol of Welsh passion. Like its London counterpart, the Principality is recognised around the globe for more than the green pitch and is a constant choice venue for the world’s biggest music stars.

All the above venues offer guided or self-guided stadium tours. Soak up the history, feel the passion and immerse yourself in the UK’s most beloved game by making a visit of any of these magnificent stadiums as part of your independent driving tour of England . For more information, contact us here and include a tour of a football stadium as part of your tailored vacation to the UK!