The Kings Speech, The Queen, The Tudors, Victoria and The Crown; the British Monarchy has captured our imaginations and inspired productions on both the large and small screens alike. But whilst we watch these shows from the comfort of our sofas, it’s worth remembering that the story of the Royal Family is woven in to the very fabric of the history and heritage of Britain. On the eve of the Royal Wedding of Prince Harry and Meghan Markle, we look at ten very real Royal sites and landmarks to be found the length and breadth of Britain…

Located in the heart of England, the site at Kenilworth Castle boasts a history dating back over 900 years! Once a stronghold for the Norman invaders the castle became an illustrious Royal Palace in Tudor times and a favourite of Queen Elizabeth I. Today you can explore the Norman Keep, ruins of the Great Hall, climb the tower steps or wander through the elegant Elizabethan Gardens.

The floating home of Queen Elizabeth II and the Royal family for more than 40 years, the Royal Yacht Britannia is an opulent ship once used for state visits and to host world figures including Sir Winston Churchill, Nelson Mandela and Rajiv Gandhi. Decommissioned in 1997 and permanently berthed in Edinburgh’s Leith Docks ever since, the yacht now welcomes visitors from around the globe to explore its decks, state rooms and royal quarters.

Located in the heart of England’s capital city, London, and adjacent to the Palace of Westminster and Big Ben, Westminster Abbey is one of England’s most important religious sites. The church has played host to every single Royal Coronation since 1066 and is the final resting place of no fewer than seventeen British Monarchs. Most recently the Abbey was the venue for the marriage of Prince William and Kate Middleton the Duke and Duchess of Cambridge. 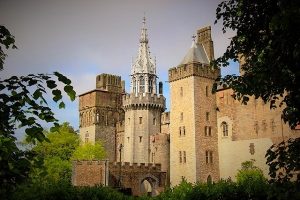 Acting as the centre-piece of the Welsh Capital, Cardiff Castle dates back to Roman times and is home to a Norman Motte, tower, medieval walls and a glorious mock Tudor gothic mansion. The castle was most recently first stop on Prince Harry and Meghan Markle’s visit to Wales.

Balmoral House has been the Scottish Highland retreat of the Royal family since it’s purchase by Queen Victoria in 1848. Located in the remote Aberdeenshire countryside, Balmoral is the Summer residence of Queen Elizabeth II and is most notably where she spent the days following the death of Princess Diana, Princess of Wales. Balmoral is open to visitors from April to July.

A stunning 13th century fortress romantically set on the edge of the mountainous landscapes of the Snowdonia National Park, Caernarfon Castle is one of several quintessential medieval castles in North Wales. Picture perfect with its unique polygonal towers which reflect in the calm waters of the River Seiont, Caernarfon Castle made the ideal venue for the 1969 investiture of Prince Charles, first in line to the throne, as the Prince of Wales. 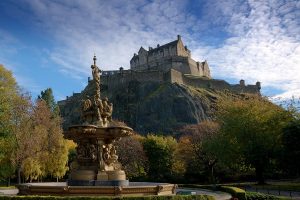 Dramatically perched on an extinct volcano overlooking the Scottish Capital, Edinburgh Castle was the Royal Seat of Scottish Kings and Queens including Mary Queen of Scots who gave birth to King James VI in the grounds of the castle. Whilst no reigning monarch has resided here for several centuries the castle still plays host to the Scottish Crown Jewels to this day.

One of London, and indeed England’s, most iconic buildings, Buckingham Palace is the principle residence of her Majesty the Queen. A home of epic proportions, the palace consists of 775 rooms including no fewer than 58 bathrooms! Daily people visit the Palace to view the changing of the guard ceremony whilst the state rooms are open to the public through the Summer months whilst the Queen resides in Balmoral.

The Tower of London has it all; a Royal palace, medieval fortress, infamous prison, costume clad guardsman, ancient ceremonies, unresolved mysteries and, of course, the Crown Jewells themselves. An icon of London and a must-visit for any Royal aficionado. 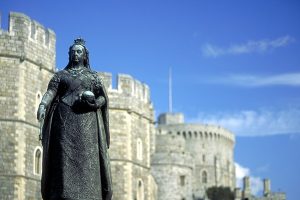 Our number one Royal site is Windsor Castle, reportedly the Queen’s favoured residence and the oldest and largest inhabited castle in the world. The castle grounds are home to glorious state apartments, manicured gardens and St Georges Chapel which, on May 19, 2018, will play host to the marriage of Prince Harry to Meghan Markle.

If you share an interest in the British Monarchy and its history, why not explore the above sites on a tailor-made driving tour of Britain. Alternatively, enjoy our Royal themed small group tour or a very special escorted coach tour.