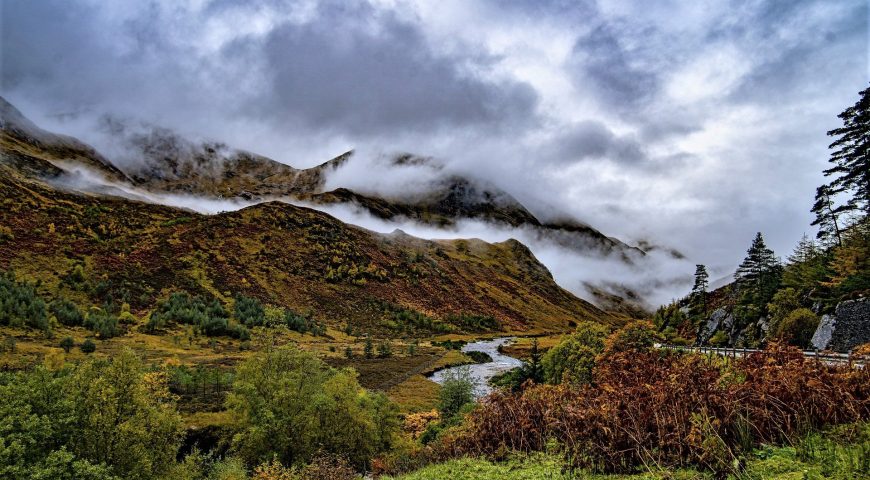 Here at adeo Travel we love good cinema! Whether it’s a series or movies – we just enjoy getting comfy to escape reality for a while, especially during long autumn evenings. I mean, who doesn’t? Being involved in travel industry though, we can’t help but notice where certain motion pictures have been filmed. Perhaps you have already seen our blog posts about “Downton Abbey” and Netflix “Bridgerton” series, or some other UK movie locations? If not, we heartily invite you there for a quick read as it is never enough of potential places for trips or holidays!

Today however, we would like to focus on new James Bond film’s Scottish locations used in Secret Agent 007’s latest adventure “No Time To Die”. No spoilers this time, we promise!

It’s worth highlighting the movie’s stunning worldwide locations including Jamaica, Italy and Norway, not to mention the many usual iconic spots in England, from the streets of London and the MI6 headquarters, through to Buttersteep Forest, Berkshire, and the eerie plains of Salisbury, Wiltshire.  Most memorable however at the scenes filmed in Scotland, where it was the Highlands that greatly contributed to the action scenes, adding wilderness and mystery to the overall ambience of the movie.

The main area of Scottish Highlands used in the latest Bond movie was the largest National Park of Scotland, the Cairngorms. This magnificent region has a special place in our hearts – we’ve had several unforgettable trips to the region and cannot stress enough how stunning it is.

With varied terrain of rugged mountain, relaxing moorlands, deciduous and coniferous woodlands, curved streams, deep lochs and tumbling waterfalls, the Cairngorms is also a shelter to many rare and endangered species of fauna and flora. Nature in its purest form makes it a perfect destination for long walks, gentle hikes, water sports, wildlife watching and in Bond’s case – chasing the bad guys! Alongside a rich palette of things to do and see, the accommodation to stay also varies – from castles and hotels to forest cabins and glamping – it’s not a surprise that this park was chosen for a new Bond movie.

To read more about wildlife of this beautiful Scottish park, and two other largest National Parks of Britain in Wales and England, please visit this link. Meanwhile, let’s move on to another location.

Telling you about a car chase scene won’t be much of spoiler… After all, fighting and chasing scenes are indispensable parts of James Bond movies! The one from “No Time To Die” was largely filmed in a highland town called Aviemore, which is located in the heart of the Cairngorms.

The town is gently embraced by the River Spey from its east side; the River which leads to a well-known Scottish whiskey distillery, Speyside. Within this peaceful town, you can find many gems including the Aviemore Ring Cairn and Stone Circle dating back as far as 2400 BC. Maybe not as spectacular as Stonehenge, nevertheless it is definitely a spot to see. The heritage steam locomotive, Strathspey, rides between Aviemore and Broomhill, offering gorgeous vistas with afternoon tea in a dining car. In Rothiemurchus Centre located within a mile form the rail station, you can find plethora of activities to do, such as archery, bird watching, hairy highland coo safari or Segway rides.

On our Rail Tours across Scotland, you can always add Aviemore to your bucket-list. It will make a perfect stop for this part of Scottish Highlands. Take a walk or stay for the night in a place, where Daniel Craig and the rest of cast & crew filmed the newest car chase scene.

Moving on to our last Scottish location, we head to the scenic Ardverikie Estate overlooking the shores of the Loch Laggan. This area forms the beautiful backdrop for car chase scenes and a spectacular bond-esque crash and stunt. For visitors, we recommend a more tranquil drive to the nearby Creag Meagaidh National Nature Reserve which provides with a complete mountain experience.

The charming estate of Ardverikie gained its popularity thanks to Clan Macpherson and their love for deer stalking, which led to a very important visitation in summer 1847 by a member of royal family, Queen Victoria. Ardverikie was later destroyed by fire and rebuilt by 1880s in Scottish baronial architecture style, characterising in cone roofs and Gothic Revival architecture. Grey towers of Ardverikie House overlooking Loch Laggan make the panorama astonishing. With sandy beaches surrounded by tall pine trees, you can relax and admire the tranquil waters any season of the year.

The estate was also used in other motion productions, such as Netflix series “The Crown” and BBC drama “Monarch of the Glen”. So why not stop by during your Scottish self-drive tour, to follow the footsteps (and car tracks) of our favourite Secret Agent, and visit this magnificent estate and loch in the heart of northern Scotland.

Head to the cinema!

We can’t give away any more, as we promised there won’t be spoilers! Hopefully, you enjoyed this little journey across the Scottish Highlands and after seeing the movie, will want to visit this area during your next trip to Scotland. Do not hesitate to contact us, to plan your journey in Britain, perhaps involving some of the locations mentioned in today’s post.