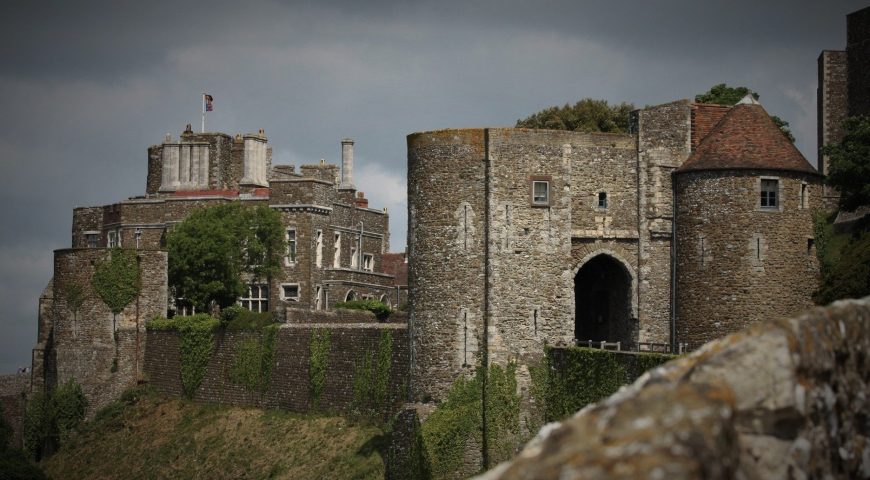 Spooky October is gone, Halloween parties are done and dusted, and many of us are already entering into the winter hibernation mode (maybe not quite like bears, but definitely close enough!). Before we head towards the end of the year however, we’re sticking with dark and eerie legends to tell you about some of the haunted castles of Wales, Scotland and England!

Whatever your views or beliefs – whether you celebrate Halloween on 31st October, All Saint’s on 1st November, Dia de los Muertos on 2nd November or have another tradition – you’ve definitely heard ghost stories or watched horror movies! Aiming to bring some creeps and chills, the frightening myths have been told by humans for centuries. In different parts of the world, you can find all sorts of places that bring the thrill… There’s a plethora of haunted houses in the USA, scary tour sites in Australian gaols (prisons), or famous Dracula’s castle and Hoia-Baciu Forest in Romania are just a tiny example of what’s out there!

Here in Britain however, it is our famous castles that slip into many of our terrifying tales and British ghost stories. Numerous fortresses spread all over the country hold their secrets, and whether ghost stories were created with the aim to entertain, teach a moral lesson or to simply scare, they surely hold some basis in truth and continue to be told to this day.

Starting with the Welsh capital city, Cardiff, let’s head to the one of the most significant castles of Britain. Deeply connected to the Welsh mining industry, Cardiff Castle started its journey as early as the 1st century AD. With Roman, Norman, Tudor and Victorian influences, the fortress is spectacular. Surrounded by tall walls, the vast grounds and a moat are perfect for relaxing, whether entering the castle’s incredible interiors richly decorated and gilded with statutes, carvings, murals, paintings, furnishings and stained-glass windows, bring a great dose of history.

It can’t all be beautiful and nice though – there are plenty of phantom stories about this castle, but as it is our first story in this blog, I will start gentle. For Halloween 2017 I had a spooky pleasure to take part in a midnight ghost tour myself, and let me tell you, I was very much creeped out…! Equipped only with torches, it was a fun scary experience, minding it was October 31st, the night when everything ghostly can happen (!). And even though I haven’t seen any spirits, you could definitely get into the atmosphere of their potential presence… One of the frightening stories from this tour were told in a nursery. No spoilers, as I recommend to go on such tour yourself, however imagine entering a complete darkness, being told about paranormal activity happening over past decades within the castle, including self-moving objects, misty spirits wandering the corridors or sudden smell of tobacco with no-one smoking around… We could light the torches again after few minutes and what appeared in front of our eyes were old family photos, creepy looking doll, and… a rocking horse, actually moving! It definitely gave some chills! Some even experienced sounds of children’s laughter…

Moving in to mid-Wales, we head to Craig-y-Nos Castle. Located in enigmatic landscapes of the Brecon Beacons National Park, “Rock of the Night” Castle was built in the 1840s. Once home to a world-renowned opera singer, Adelina Patti, it was later transformed into a Tuberculosis hospital. Featured in BBC science-fiction show “Doctor Who” and its spin-off “Torchwood”, the castle serves as a dog-friendly hotel accommodation and a wedding venue since the year 2000. The romantic setting and picture-perfect surroundings, make it an ideal base for that area of Wales.

But don’t let this charming façade fool you! Mentioned before Adelina Patti had her own theatre built on-site for her musical performances and social events. In the 1990s, a young girl singing during children’s concerts said she has met a mysterious lady, very well dressed in a black attire. After wishing her well and assuring she would give an astonishing performance, the lady was never seen again nor was associated to any of the gathered when asked about. Was it perhaps the ghost of Adelina herself…? There is more creepiness and riddles though, as one of the ghosts stories mention a child phantom, probably one of the TB hospital patients. Ghost hunters staying a night in the basement below the theatre stage described sounds of giggling and also bouncing echo as if a ball playing… Is it possible that children who unfortunately died within Craig-y-Nos Castle are destined to stay there forever?

On a recent webinar about Aberdeenshire, in Scotland, I learnt about Fyvie Castle. This grand and impressive multi-period fortress was built in 13th century and over the ages became a great example of Scottish Baronial interior architecture. With remarkable collections of portraits, antiques, armoury and furnishings, there is plenty to admire! Within the beautiful grounds, you can walk by a charming lake (home to a rich birdlife), enter an American Garden with unique plants or buy some seasonal fruits and vegetables, also used in the castle’s Tearoom produce.

My biggest attention however – that became an inspiration for this blog post – was drawn to a tale of the ghost of Dame Lilias Drummond. The wife of Alexander Seton and a mother of five daughters is said to had her heart broken by her unfaithful husband. Dissatisfied with the lack of male heir to the castle, he is rumoured to have cheated on Lilias with her cousin, who later became his second wife. Betrayed and heartbroken, she either ran away to her home village in Dalgety and died of a broken heart or… was locked in a bedroom and starved to death by Alexander himself. Her name was scratched into the stone windowsill of the fortress and remained a mystery until today. Who did it? And how? As the window itself is placed over 50 ft from the ground…

Feeling spooky yet? Well, I’m only halfway there! Next on the map is another Scottish gem – Crathes Castle. The 16th century Scottish tower house in the rolling hills and forests of Royal Deeside is simply magnificent. Rich interiors of the Burnett family’s legacy include antique furniture, painted ceilings, oak panels and portraits. In the splendid gardens with uniquely shaped topiaries, colourful flowers, various herbs, pools, fountains and even mazes, both of plants and turrets, you can relax and admire in tranquil nature.

There is nevertheless a ghost story lying behind this castle too. It is said that a spirit of a young woman in a long, green dress carrying an infant on her arms is often present in one specific room… Although her identity remains unknown, it is believed she was a servant girl, who fell in an unfortunate pregnancy with a member of Burnett family, then owners of Crathes Castle’s. The day after baby’s birth, it was believed that the girl either moved out because of shame, or… was murdered by the disapproving family. With no proof, the story was just a story. During a renovation in 1800s however, a woman’s and an infant’s bones were found under the fireplace. Since then, the room with a doomed fireplace took the name of the “Green Lady’s Room”. Often bringing chills to those who enter it, once even to Queen Victoria herself, it has been holding an unsolved mystery. Could this be a cold-blooded murder by the Burnett family… or is there another frightening story we know nothing of?

Wandering the castle, be aware of the sounds of a crying baby and desperate sobbing of the poorly fated Green Lady…

Goodrich Castle located in an open countryside of Wye Valley Area of Outstanding Natural Beauty is a great example of medieval architecture. Once a Royalist stronghold near Welsh-English border, the castle was sieged during a Civil War and largely destroyed. It is now looked after by English Heritage, so do not hesitate to ask one of our agents to include a special Pass to your vacations allowing you to visit this, and over 300 other sites, spread across England.

Meanwhile, let’s move to another nightmarish story haunting the castle’s ruins… During a siege of the Civil War, one of the Royalist officers stationed in the fortress, Charles Clifford, was hiding in the castle together with his lover Alice Birch, a niece of a Parliamentarian officer; they decided to run away together from the terrors of certain defeat. Star-crossed lovers from different political backgrounds, stole a horse and escaped at a pitch-dark night as quick as they could. Unlucky with the weather conditions of a dense rain, the muddy River Wye reached close to the castle, and as they slipped from the tower, they fell straight into the waters of river and drowned… Today, during heavy rain and strong winds, you may hear bloodcurdling screams and cries of these unfortunate lovers. Desperate to escape the tough reality of war to a peaceful and safe place, they are forever doomed in the ruins of the castle, they once found hopeless love in…

Also looked after by English Heritage, Dover Castle in South East part of the country is a fortified building with astonishing views of the English Channel. Perfectly located by White Cliffs and the beach, it hides a great history behind its walls. The castle grounds are quite impressive – with Great Tower holding a medieval palace, the oldest surviving Roman Lighthouse, PWRR Museum with a collection of fascinating military items and memorabilia, dramatic underground tunnels and the only working British 3-inch gun in the world from 1915 – there is plenty to see!

At night however, be aware of Dover Castle’s phantoms… Especially ill-fated ghost of a 15-year old boy, whose only job was to cheer and encourage the soldiers during Napoleonic Wars by drumming marches. One evening, he had been sent for an errand to the town of Dover and as always, he took his drum to pass the time pleasantly. As he walked in to town, he was ambushed by two soldiers who wanted his money. The brave young boy tried to fight and run, but suddenly a heavy sword held by the unchivalrous soldier was lifted to his neck, leaving him without his poor head… Dying by the castle, he chose to stay and keep his job, as the headless spirit seen and heard by many visitors is wandering the castle every night, loudly tapping favourite marching sounds on his beloved drums…

Although sad, terrifying and creepy, the paranormal stories of dozens haunted castles should be mainly taken as a lesson of simply being good to others… Hear them during visits to the fortresses mentioned above or choose from many others! With our tailored to you self-drive tours of “Castles and Manors of…” everything is up to you! Simply click on the links under country name to see them all: Wales, Scotland, England or the whole Britain; and we will help you designing them, so you can stay inside some historic castles yourself!