Christmas and New Year are behind us, the days are growing longer again and we are busy getting ready for the 2022 season! To prepare, in November my colleagues travelled to the far north of Britain to stay in few hotels we work with and to see some of numerous attractions Scotland has to offer. A wonderful familiarisation trip brought new knowledge and many potential additions to our bespoke journeys, which we will gladly be recommending to our guests. 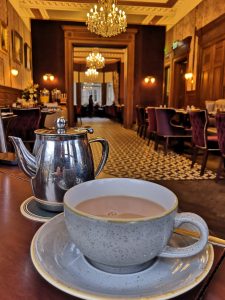 Flying from English Bristol to Scottish Glasgow, Darryl and Luke headed straight to the capital city, Edinburgh. With many beautiful hotels the city has to offer, our agents chose the one we have worked closely with for a very long time with – The Bonham Hotel.

This boutique hotel, originally built as three separate elegant townhouses in 1872, is only minutes away from the main attractions of Edinburgh. Darryl and Luke were impressed with the modern interiors which retain period features of the original townhouses, such as chandeliers, fireplace mantles, artefacts, paintings or lamps, are very stylish and elegant. The luxury bedrooms offer modern amenities and are complemented by gorgeous views looking over Drumsheugh Gardens to the front; the large bay window in Luke’s room offered a perfect spot for his morning coffee watching the sun rise over the city.

Not only offering excellent accommodation, at The Bonham Hotel you can find No.35 Restaurant with an A La Carte Menu prepared by Head Chef Marco featuring seasonal and local produce. Unfortunately, Darryl and Luke didn’t get to enjoy their famous Boozy Snoozy lunch (consisting of a 3-course selection including a half bottle of wine per person) but they did manage to indulge in one of the very best Scottish breakfasts they’ve experienced complete with traditional Scottish potato scone and haggis!

Well-rested and taken care of, Darryl and Luke could explore the enchanting city of Edinburgh and they just fell in love with it (again)!

Synonymous with the nation’s ancient culture, the capital of Scotland is visually spectacular, bristling with elegant architecture and hallmarks of a long and turbulent history. The city’s skyline is dominated by Edinburgh Castle, an imposing fortress which appears to grow organically out of the ancient volcanic rock upon which it perches. Surrounding the castle, Edinburgh’s Old Town clings to the hillside, a rambling network of cobbled streets and lanes with shops and pubs to be explored. Stretching the other side of Princes Street is the elegant “New Town”, home to wide avenues of grand Georgian town houses and garden squares which contrasts perfectly with the winding alleys of the Old Town.

A short walk from the Bonham situated in the Newtown, Darryl and Luke found themselves on Princes Street; after pausing to take photos of the city gardens and gothic Scot Monument they began the walk through the lanes to the Old Town. First stop on their whistle-stop tour would be Mary King’s Close.

Inspired by spooky legends from our November blog post about haunted castles, The Real Mary King’s Close on the Royal Mile had to be on the itinerary! The attraction located in the heart of Edinburgh’s Old Town is an underground history tour. Once a bustling merchant street belonging to burgess Mary King, it became excluded from the world, effectively buried beneath the city chambers. Today it makes for a sinister space where tour guides tell of a time when the black plague of 1645 ravaged the city. The Close is a very narrow alley joining two larger roads with houses, taverns and shops. During the tour, costumed characters (guides) will take you through the subterranean streets and shortcuts of the Close sharing both historic facts and anecdotal tales about the sad past, real characters and ghost stories of this blood-curdling sealed-off corner of Edinburgh waiting to be discovered!

Next stop during their Scottish adventure was Edinburgh Castle; one of Britain’s most popular tourist attractions inseparably linked with Scottish history. Perched 400 feet over the city on a long extinct volcanic rock, it provides Edinburgh with an icon of its famous skyline. Dating back to 6th century, the strategic castle and royal stronghold with its lofty position on three sides sheer rock face and steep terraces  was a challenge for any attacker. Admission is easier in our day-and-age with a queue skip ticket from Historic Scotland or as part of an Explorer Pass. 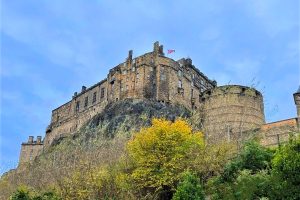 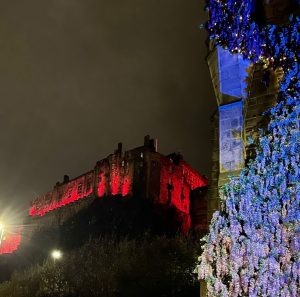 The Castle is accessed from the east, where a softer slope rises to the crag along, what is now known as the bustling Royal Mile. Darryl and Luke took the opportunity to take photos of the city skyline from the Esplanade, an area which acts as vehicle parking and taxi drop off for the most part of the year but which springs to life throughout August when it hosts the magnificent Edinburgh Military Tattoo as part of the Edinburgh Festival. Passing through the Gatehouse you then cross the drawbridge to some of the Castle’s original and impressive military defences including the Portcullis Gate and the Half Moon Battery from where you can gain more stunning views over the city. Within the grounds of the Castle you’ll discover a number of fascinating areas. What was once a castle hospital now houses the National War Museum of Scotland a collection of medals, uniforms and other military memorabilia detailing 400 years of Scottish military history; the tiny St Margaret’s Chapel is believed to be one of the oldest structures not only within the Castle grounds but within Edinburgh; and on Mill’s Mount Battery there’s a ritual of the firing of the one o’clock gun not to be missed.

A visit to Edinburgh Castle is a highlight of any Edinburgh city break or Scottish holidays.

After all that horror and history, it was time for a drink! Next stop was the Johnnie Walker Princes Street Experience located in the heart of Edinburgh’s West End. The building itself, in a prime location on Princes Street, has undergone a multi-million pound refurbishment into a modern and elegant space, featuring The 1820 Rooftop Bar with stunning views of Edinburgh, the Explorers’ Bothy restaurant and lounge serving luxurious food dishes pared with delicious variety of the “Water of Life”, an underground cellar with a whisky master showing you the production of this spirit, or a history lesson in Archive Room with exploration of Johnnie Walker artefacts.

Darryl and Luke chose The Journey of Flavour experience tour which provided them with an unforgettable experience; after completing a survey to assess their preferred flavours, they embarked on a fully-guided journey of discovery through various interactive rooms and exhibitions to learn about the great Scottish figure of Johnnie Walker, how he developed his whisky blends and about the history of whisky across Scotland.

Like a Willy Wonka tour they got to mix their own whisky cocktails perfectly paired specifically to their tastes based on their previous flavour survey and sample other blends along the way. Thanks to such personalised understanding, their drinks were just perfect! The tour was a great experience for both Darryl (a whisky-drinking novice) and Luke (somewhat a whisky connoisseur) and would come highly recommended for both those seeking an introduction to whisky and more seasoned drinkers!

Of course, Johnnie Walker on Princes Street is not the only place to enjoy a whisky tour! There are a plethora of distilleries spread around Scottish mainland from where Johnnie Walker takes it’s blends. With such a rich culture and tradition, a visit to a Highland distillery is also must while being in Scotland, even if you’re not this spirit’s drinker like myself. The Johnnie Walker Experience in Edinburgh offers a great way of getting to know the fascinating production processes and the variety of characteristics of the five whisky regions, to give you a deeper insight to country’s heritage and where in Scotland might be next on your travel bucket list!

I have to leave you hanging for this one – but not for long! If you would like to know how the rest of the trip went, we will be posting another blog in February, where we’ll share experiences of Darryl and Luke as they headed north in to the Highlands and visited places, including mystical Loch Ness and the picturesque Portree on the Isle of Skye not to mention tackling parts of the glorious NC500 driving route. Meanwhile, if you have any questions or would like to plan your vacation to Scotland and include Edinburgh as one of your destinations, please do not hesitate to contact us!