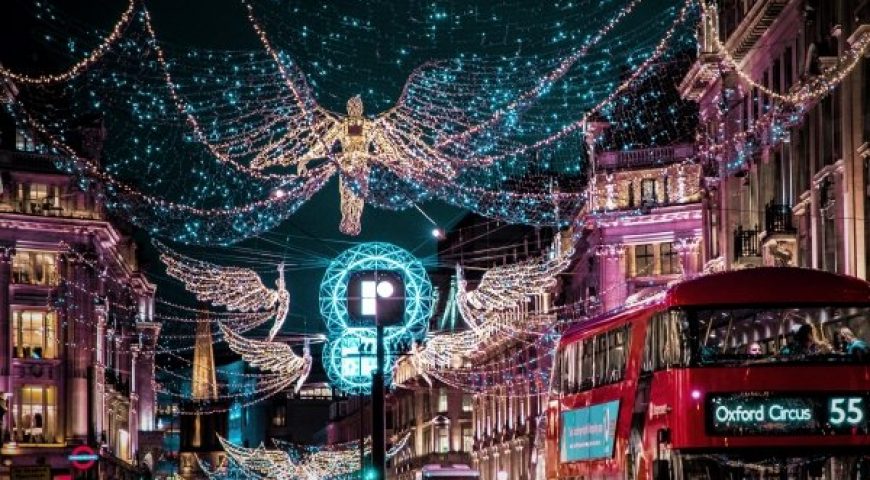 Christmas in the UK

It’s that wonderful time of year again. The temperatures are colder (especially in Scotland, the North of England and Wales), the food tastes better, and relatives bombard you with gifts of deodorant/after-shave sets and socks. Whilst clear similarities are there between the UK and the US, our Christmases differ on several obvious, but also a number of lesser-known traditions. For this blog, we will focus solely on these differences and traditions that are unique to Britain!

1) Christmas Eve – More recently, Christmas Eve has primarily been adopted as a day of celebration away from your family. Whilst our transatlantic cousins have Thanksgiving to catch up with friends who have perhaps moved away, Brits use the day before Christmas to meet with friends and reminisce over a drink or two. Furthermore, and to the point a lot more traditionally, adults frequent their local pub in the late morning of Christmas Day to celebrate with local friends/patrons, not too dissimilar to New Year’s Eve.

2) Christmas Crackers – For those unaware, and perhaps hard to explain the popularity of such an item, a Christmas cracker is like a Thanksgiving wishbone. Two people hold onto one side each of a soft cardboard tube, and with a quick pull, one person will take more of the cracker than the other, along with hearing a loud bang. Inside the victor’s majority is a joke (undeniably terrible, e.g. What do they sing at a snowman’s birthday party? Freeze a jolly good fellow); along with a coloured hat in the form of a crown. Even grandparents must wear them throughout Christmas dinner if not all of Christmas day. Tradition is tradition after-all. 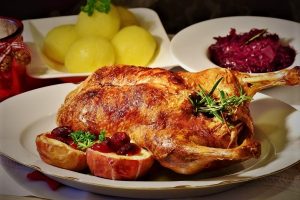 3) Christmas Lunch/Dinner – Whilst Brits frequently refer to the main meal as “dinner”, the general eating time is usually around 1-2pm. This difference means a different Christmas Day to that in the US. In Britain, relatives generally spend Christmas Morning in the comfort of their own homes, before immediately preparing the feast or driving on the empty roads to friends and family’s houses. Once there, the food differs to that in the US. One example, Brits roast their potatoes, whereas in the US mashed potatoes are preferred. We also include various other British traditional Christmas foods, these include: Yorkshire puddings (not actually puddings), chutney, pork crackling and pigs in blankets (sausage wrapped in bacon). Most importantly though, whereas Americans prefer a Christmas ham, Brits do not celebrate Thanksgiving, therefore choose Christmas Day as the day for turkey, or if desired goose.

4) Elongated Festivities – Without Thanksgiving, the British Christmas starts earlier than in the US. Supermarkets begin digging out the Christmas playlists from as early as the beginning of November, Christmas cards and wrapping paper hit the stores even earlier, and Santa’s grottos begin popping up in shopping precincts. If proof is required of our desire to extend the festive period for as long as possible, in Love Actually (2003), the Christmas countdown starts six weeks prior to the 25th December, which is a very accurate portrayal of life in London during the hectic festive period.

5) Christmas Sales – Similarly to the last point, more recently, aside from the 12 Days of Christmas, the festivities have extended well into the new year with the January Sales. Adapted to start from Boxing Day (December 26th) more recently, our sales mirror Black Friday in the States. Shoppers descend on retail stores with their Christmas money/vouchers in hand in search of a winter bargain. Holiday seekers also take this time of year, with the multitude of public bank holidays, to plan and book their trips in anticipation of the new year, looking forward in a much more positive manner on what hopefully will be many relaxing breaks.

6) Christmas Markets – adopted from Europe’s finest cities, many British cities/towns are now opening markets in the same vein. From our very own market in the capital of Wales Cardiff, to cities including Bath and York to the fabulous Winter Wonderland in Hyde Park, London, there’s truly something for everyone. The mulled wine/hard cider, craft huts and ice-skating are just several popular attractions of such events, and let’s not forget the Rockefeller Center-esque illuminations and celebrations throughout the country.

7) TV Scheduling – Whilst American football fixtures sometimes fall on Christmas Eve and Christmas Day, the UK gets a day off sport (soccer in particular resumes on Boxing Day and bank holiday fixtures). Instead, once the lunch has been eaten, a countrywide broadcast of the Queen’s Speech begins around 3pm (almost compulsory viewing in Britain!). In the evening, following many Christmas or animated films shown on the BBC, there is an annual Doctor Who Christmas special. This year, Brits are being treated to a Great British Bake Off special, along with the eagerly awaited return of Sherlock, over the Christmas/New Year period.

If the above differences have piqued your interest in experiencing Christmas in the UK, then follow this link to our uniquely special tour, Christmas in Scotland, booking soon for 2017. Also, our other tours offer similar destinations and experiences, so if Christmas in the UK has been lingering on your bucket list, do not hesitate to enquire online or by phone today (toll-free from the US/Canada 1-866-209-4554) for a quotation and tailor-made quotation – we look forward to hearing from you!