Britain’s Roman Heritage: Must visit Roman remains in the UK

So much of Britain’s, and the world’s modern identity can be attributed to the prosperous Roman Empire; the remnants of which are now scattered throughout the UK. Huge areas of what we now know as Britain were once governed by the empire for a near 400 years, leaving in its wake a plethora of historical artefacts, precious relics and complex architectural designs, all of which make for fascinating visits. Below is a complied list of the must visit Roman remains in the UK.

In terms of lasting influence, few places in Britain have a stronger identity than the city of Bath; hence its namesake. The magnificent Roman Baths are believed to have been constructed before the turn of the second century AD, used by the romans for public bathing. The site is one of the best-preserved Roman remains in the world.

To the north-west frontier of the Roman Empire; the world famous remains of Hadrian’s wall still stand today, uncovering the empire’s turbulent relations with the north. Built after Hadrian’s first visit to the British Isle in response to the ever-present threat of the north men (or Barbarians), the wall once stretched beyond 70 miles from Wallsend on the River Tyne in the east to Bowness-on-Solway in the west. Visit Birdoswald, Vindolanda & the Housesteads to discover the remarkable history of this great Roman remain.

This historic city is home to Roman City walls and gate towers, and a stunning excavated Roman Amphitheatre; the largest of its kind in Britain. The site was used for entertainment and military training although it did not enjoy a sustained period of use after it was built until it was revived in the late 3rd century AD. Less than half of the oval amphitheatre has been excavated, with the rest remaining untouched. The amphitheatre is one of the country’s most recognizable Roman remains. 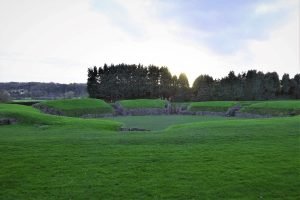 Turning our attention to the land of Wales, nestled on the edge of the city of Newport lies the quaint Roman town of Caerleon. This Roman hotspot slips under the radar when it comes to renown, but the small town is home to a wealth of Roman remains including a magnificent oval Amphitheatre. Built to serve the Roman legionary fortress of Isca around AD 90, the site has been remarkable well preserved and charges no entrance fee. Neighbouring the site are the remains of a Roman barracks as well as an insightful Roman Museum in the heart of town.

Cirencester was the second largest town in Britain during Roman rule and is of huge historical importance. The town was established in 43 AD and played a pivotal role in the logistical support further north and the housing of cavalrymen. Following the withdrawal of troops in about 70AD, the town was redeveloped in which the community thrived. The remains of Cirencester amphitheatre can be visited as well as the Roman museum.

Fascinated by Roman heritage? Start planning your visit to these incredible locations and discover the cultural impact the Romans have had on Britain.